The US envoy to the United Nations, Nikki Haley, has accused the UN of damaging the prospects for peace between Israel and the Palestinians.
The organisation “has outrageously been one of the world’s foremost centres of hostility towards Israel”, she said.
Mrs Haley was addressing an emergency meeting of the Security Council called after President Donald Trump’s decision to move the US embassy to Jerusalem.
The move has been widely condemned and sparked clashes in the West Bank.
Israel has carried out air strikes against targets in the Gaza Strip, injuring a number of people, after Palestinian militants fired rockets into Israeli territory.
Two Palestinian men died after Israeli troops fired on crowds in Gaza during clashes earlier on Friday.
Tensions remain high across the Middle East after Mr Trump announced the US would recognise Jerusalem as the capital of Israel, reversing decades of US neutrality on the matter.
Israel has always regarded Jerusalem as its capital, while the Palestinians claim East Jerusalem – occupied by Israel in the 1967 war – as the capital of a future Palestinian state.
Mrs Haley said the decision “recognises the obvious; that Jerusalem is the capital of Israel”. She said the US continued to be “committed to achieving a lasting peace agreement”, and accused the UN of bias.
“Israel will never be, and never should be, bullied into an agreement by the United Nations or by any collection of countries that have proven their disregard for Israel’s security.” 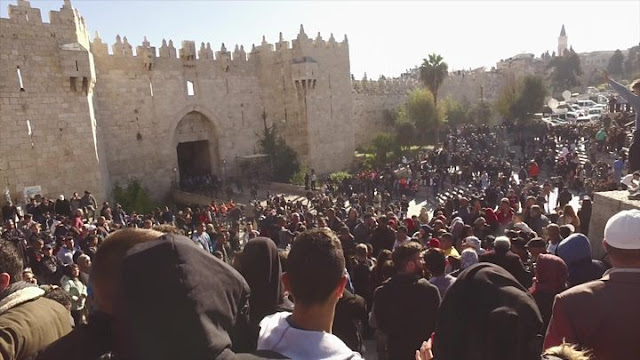