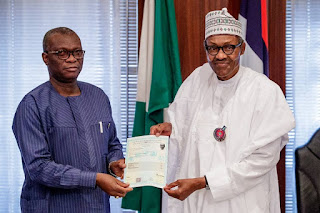 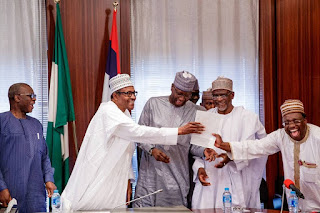 The West African Examination Council (WAEC) has presented an attestation certificate and confirmation of school certificate result to President Muhammadu Buhari, his spokesman has tweeted.

Iyi Uwadiae, the WAEC registrar, presented the certificate to Buhari on Friday at the presidential villa in Abuja.

Femi Adesina, the special adviser to the president on media and publicity, wrote on Twitter: “WAEC presents attestation certificate and confirmation of school cert result to President Buhari. What will the naysayers say next?”

WAEC presents attestation certificate and confirmation of school cert result to President Buhari. What will the naysayers say next?

There has been controversy over whether or not he wrote the O’Level exam having claimed in his affidavit to the Independent National Electoral Commission (INEC) that his original credentials were with the military.

The Peoples Democratic Party (PDP), the main opposition party, had threatened to go to court over the certificate saga.

In the heat of the controversy, Adesina quoted the military as saying they had lost Buhari’s certificate.

“The military already said they lost the certificates. But does it mean that it did not exist that the president went to school, sat for examinations and passed; attended military courses and War College?”

“I joined the West African Examination Council as a pioneer staff. I was the first substantive Nigerian Assistant Registrar. I took over the control of the examination from the University of Cambridge. I took examiners to Cambridge for training across 10 years and trained them in Nigeria. I had the opportunity of issuing WAEC certificates to three former Heads of State: Buhari, Abacha and Babangida in the 60s,” he told the newspaper in an interview.