Tens of thousands of people joined a nationalist march in Warsaw on Saturday, organised to coincide with Poland’s independence day.
Marchers chanted religious slogans such as “God, honour, country” and some called out racist chants including “Pure Poland, white Poland”.
An “anti-fascist” counter-protest attracted about 2,000 people.
Police estimated that 60,000 people took part in the main march.
It attracted far-right agitators from elsewhere in Europe, including Tommy Robinson from the UK and Roberto Fiore from Italy.
Kamil Staszalek, 30, said he was there to “honour the memory of those who fought for Poland’s freedom”.
“I’d say some people here do have extreme views, maybe even 30% of those marching, but 70% are simply walking peacefully, without shouting any fascist slogans,” he told the AFP news agency.
Supporters of the country’s governing conservative Law and Justice (PiS) party took part in the annual march, which takes place alongside other events.
Poland’s interior Minister Mariusz Blaszczak called the event a “beautiful sight”.
“We are proud that so many Poles have decided to take part in a celebration connected to the Independence Day holiday,” he said. 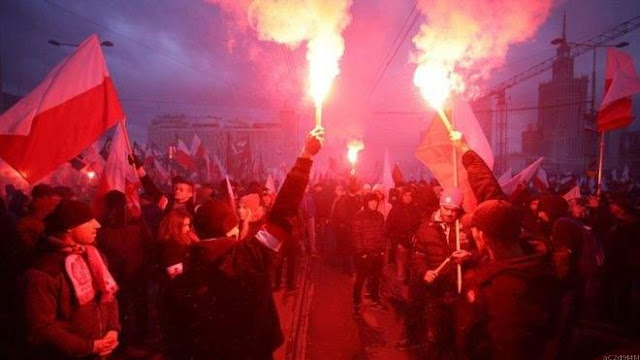