With the sole aim of achieving excellence and alleviating poverty in Nigeria, Yattiyr scholarship initiative, a non-governmental organization is going to different schools to award scholarships to students that have a bright vision about their future but are restricted due to the financial limitations faced by the parents of those students which restrict them from achieving their academic dreams.
The Yattiyr scholarship initiative consists of a corp member and students from different departments in the University of Ilorin. They visited two different government owned schools in Ilorin; community grammar school, oke-ose and River Basin college on July 12, 2018.
On April 27, 2018, the members of the organization visited the community grammar school in oke-ose and presented questionnaires to the senior secondary school one and two students that had questions about their goals after school, their future ambition and the conditions that are restricting them from achieving their set goals. The various answers submitted were thoroughly analysed and five students, two girls and three boys were carefully selected and awarded scholarships on Thursday. The scholarship covers their school fees for the three terms in the next school session. The beneficiaries were surprised that they were called out for the scholarships and they were grateful to Yattiyr scholarship initiative with gleaming smiles on their faces. One of the beneficiaries was not present in the hall when he was called because he was sent home for his school fees, the foundation promised to pay his school fees so he can stay in school.
Yattiyr scholarship initiative also organized a reading club for the students in a bid to promote their reading habits and to foster academic interactions among the school students. The executive director of grouped and each group was led by an elected group leader. Yattiyr scholarship initiative, Fatoye John, a medical student, told them that the meaning of “Yattiyr” in Hebrew means excellence, he motivated them to always strive for excellence, ready to learn and not to give up on their dreams. The vice principal also encouraged the students to be serious with their academics so as to get more scholarships like this.
Also, on June 12, 2018, in River Basin College, the foundation held an academic seminar for the senor secondary school one and two students which focused on achieving life goals. The seminar got the students attention and they were bold in discussing their future ambition with the members of Yattiyr scholarship initiative.
On Thursday, Yattiyr scholarship initiative presented fifty different textbooks to the school. The books cut across the various academic disciplines at the secondary school level, there were inspirational books, motivational books and literature books.
They appealed to the school that the students should be given a free access to use the books. The vice principal promised that the books will be kept in the library so the students can access to the books. Mr. Fatoye encouraged the students to always make use of the library to read different books, he also told them that the best friend of an active mind is the pen. An active mind seeks knowledge and writes whatever he learns.  One of the teachers appreciated the members of the organization for their kind gesture. The vice principal also appreciated the members and persuaded the students to be ready to learn every day, make use of the library and appreciate the knowledge gotten from different fields of life. A reading club was created and the students that were interested in joining the club. The students were grouped and members of the Yattiyr scholarship initiative were assigned to different groups to oversee the development in the student’s reading habit.
YSI, the acronym for Yattiyr scholarship initiative is a team for young minds taking hold of leadership in her little sphere of influence to proffer hope and access to quality education for promising indigents via advocacy, mentorship and scholarships. YSI has a vision to expand their horizons and reach out to many students that are interested in learning and also to achieve excellence academically. To know more about this foundation, visit this website:
ysischolarships.com, on Facebook: Yattiyr scholarship foundation, Instagram: Yattiyr Scholarship or through mail: Yattiyrscholarships@gmail.com. For more questions, you can call 08169310932 or 08124956652. 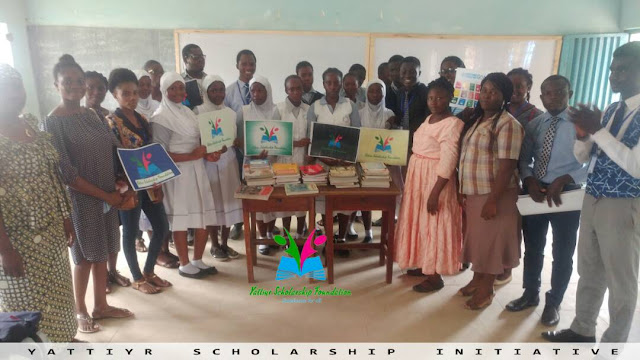