Protesters have shut down 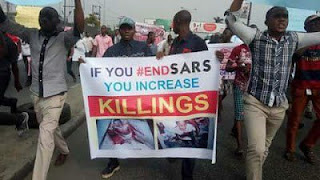 Meanwhile another set of protesters have also stormed Abuja and Warri, Delta State, demanding the end to SARS.

The counter protesters are demanding the end of intimidation and brutality by the police👮 unit.

Recall that Governor Wike, in a statement last week, 🔈alleged that the Federal Government was set to use operatives of the Anti-Robbery Squad to rig the 2019 election, particularly in his state.