Harare International Airport has been renamed after Zimbabwe’s current President, Robert Mugabe.
Transport Minister Joram Gumbo justified the decision on the grounds that Mr Mugabe was a “war hero” and “African icon”.
There is tension about who will succeed the man in power since 1980, with a number of key contenders removed from their posts. Mr Mugabe, 93, says he will stand for re-election next year. His wife Grace has been tipped to succeed him and is expected to be appointed vice-president.
When plans to rename the airport were announced in September, Zimbabwean journalist Elias Mambo suggested the president’s ego was being “massaged”. 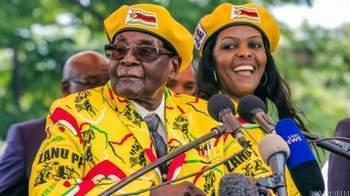